java script is required for this page
Sitemap About Us
Home    >   Sitemap >   About Us    >  Mr. Santosh Jha, Ambassador of India to Tashkent 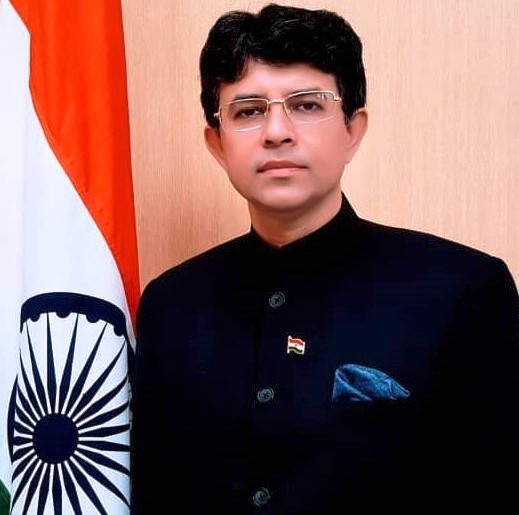 Ambassador Santosh Jha arrived in Tashkent to assume charge as the Ambassador of India to Uzbekistan on 25 July 2019. He presented his credentials to the President of the Republic of Uzbekistan H.E. Shavkat Mirziyoyev on 20 September 2019. Prior to coming to Tashkent, he was Deputy Chief of Mission in the rank of an Ambassador at the Indian Embassy in Washington DC.

Ambassador Jha has served in different capacities in the Ministry of External Affairs (MEA) in New Delhi and in India’s Mission abroad, including in Moscow, Vladivostok, New York, Brussels and Colombo.  In Vladivostok, he was Consul General of India during 1998-2000.  In Brussels, he served as Deputy Chief of Mission in the Indian Embassy, accredited to Belgium, Luxembourg and European Union.  Ambassador Jha has been involved closely in negotiations for an India-EU Bilateral Trade and Investment Agreement (BTIA) and the India-Sri-Lanka Comprehensive Economic Partnership Agreement (CEPA).  Ambassador Jha also helped erect the architecture for development cooperation between India and Sri Lanka, following the end of civil conflict in that country in 2009.

Between 2004-2007, serving in the Americas Division in the MEA, Ambassador Jha was a member of the negotiating team for the India-US nuclear deal and was closely associated with the development of India-US relations in the field of space, defence and high technology.

Between 2013 and 2017, Ambassador Jha held different positions, heading MEA’s Divisions for relationships with Western Europe, Human Resources and Management Affairs.  Subsequently, in April 2015, he was assigned the task of rebuilding India’s Policy Planning Division into an institution capable of responding to India’s growing global engagements.  In this capacity he established a number of bilateral, regional and global dialogues such as Raisina Dialogue, engaged with India’s key partners on policy planning and strategy and started several Track 1.5 bilateral, trilateral and multilateral dialogue mechanisms.  During this period, he also headed the Counter Terrorism and Cyber Security Divisions of MEA.  In 2016-17, he represented India at the meeting of UN Group of Governmental Experts (UNGGE) on Development in the Field of Information and Telecommunications in the context of International Security.

Ambassador Jha holds a Master’s Degree in History from the University of Delhi.
He speaks English and Indian languages.  He is married and has a daughter and a son.